A little less than two weeks ago, the Agriculture Secretary Tom Vilsack gave his first major speech regarding our national forests, a domain over which his department has jurisdiction.  The speech was an inspiring look at the direction that this administration plans to take managing our forests.  Vilsack laid out a vision for protection on both public and private forest lands, ensuring protections for roadless areas, addressing the challenges of climate change, and decreasing forest loss from development.

In terms of forest planning, Vilsack made the heartening announcement that the Forest Service would not appeal a court ruling which threw out Bush-era regulations.  That ruling, which you can read more about here, restored key protections granted under the National Forest Management Act.  Rather, the agency will write new regulations that promise to manage our forests in a responsible and balanced manner.

Just as importantly, Vilsack announced the intention of the Obama administration to defend the 2001 Roadless Rule.  They will seek to uphold it in court after the favorable decision earlier this month.  However, he also made clear that if it proves impossible to protect our roadless areas through the courts, the administration will do so through a new rulemaking process.  Currently, the 2001 Roadless Rule is in place in most parts of the country and is protecting more than 40 million acres of roadless areas.  However, several key areas included under the original 2001 rule are not protected, including Alaska's Tongass National Forest and roadless areas in Idaho.  Idaho and Colorado were two states that took advantage of the temporary Bush administration policy to create state-specific plans for roadlesss management.  While Idaho's plan is finalized, several organizations, including the Sierra Club, have filed suit.  Coloroado's roadless plan is still in draft form.

Take action and tell the Obama administration to live up to its promise and uphold the 2001 Roadless Rule and protect our cherished roadless areas.

Sign Up to Host a House Party for National Parks

The Sierra Club is featured prominently in the upcoming Ken Burns documentary series The National Parks: America's Best Idea, which will air on PBS in late September.

We are organizing house parties on September 20, one week before the series airs.  For these parties we are providing hosts with a free one-hour 'sneak preview' DVD about the series and all the materials you need to throw a house party and take action to help the wildlife in our national parks adapt to climate change. 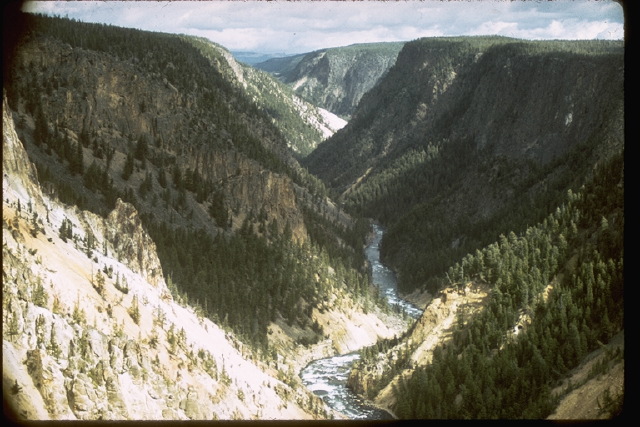 Courtesy of the National Parks Service

If you're able, sign up to host a party in your office, home, or public space to increase awareness and appreciation of the national parks, build local community, and take action to urge the leaders in the Obama administration to proritize protecting our public lands from climate change.

The national house party day is Sunday, September 20th - and the deadline to register parties in time to receive the DVD is September 13th.  Register now.

This past Wednesday, at the prompting of the Sierra Club, Senator Bill Nelson held a press conference in Florida to discuss the ramifications of drilling in the eastern Gulf of Mexico.  The event served as a venue to deliver to the Senator our petition signed by more than 3,000 Floridians in support of his efforts to fight offshore drilling.  It also served as an unveiling for our new report Don't Rig Our Coastal Economy.  That report can be viewed online here.

Other speakers at the event were DT Minich from the St. Pete/Clearwater Convention & Visitors Bureau, a local beachfront hotel owner Mary Wilkenson, as well as representatives from the Natural Resources Defense Council and Progress Florida.  The event was covered by local radio and television outlets including ABC, FOX, and CBS.

See coverage of the event below:

Two weeks ago, Secretary of the Interior Ken Salazar traveled to Acadia National Park at the request of his friend and former colleague Senator Susan Collins.  While in Maine, Salazar requested an informational meeting to learn more about Maine's vast undeveloped forestlands.  The meeting was largely arranged by Karen Woodsum, the Director of Sierra Club's Maine Woods Program.  In Bar Harbor, on the rocky coast of Maine, she managed to gather together in one room Secretary Salazar, Senator Collins, and key coalition members.  The small group, which included conservation leaders, landowners, business owners, and the Governor's conservation team, had a very productive and positive information sharing session.  In addition to learning about Maine's forests, Salazar shared a new top priority of the Department of the Interior: "America's Treasured Landscapes."  That conservation program is only in the early stages of formulation but it promises to be a visionary new way to protect large landscapes in a changing world. 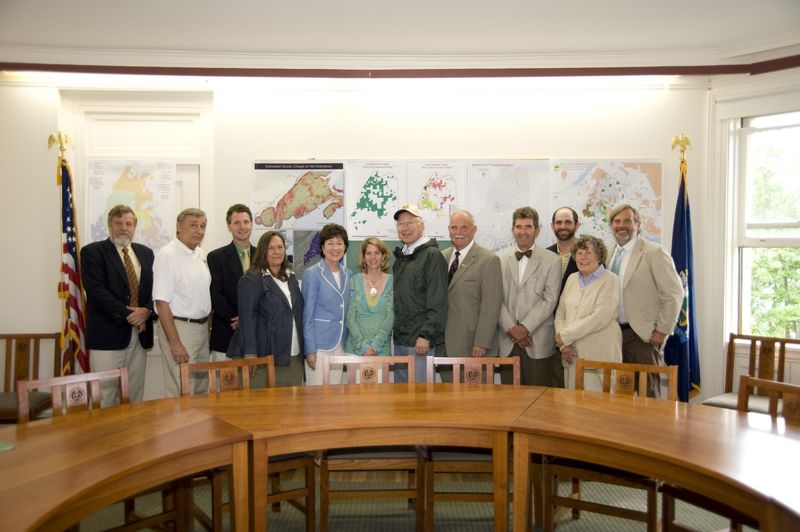 Maine's extensive northern woods most certainly qualify as one of our country's treasured landscapes.  As the largest undeveloped tract of forestland east of the Mississippi, the Maine woods comprises a contiguous, undisturbed forestland rarely seen outside of the western US.  While western states often have extensive tracts of public lands, Maine is about 95% privately owned.  This presents a myriad of challenges to ensuring landscape-scale protection, but Karen Woodsum and the Sierra Club are working tirelessly to secure just that.  We are excited about the opportunity to work closely with Secretary Salazar to promote and protect America's Treasured Landscapes, such as the Maine Woods.

Yesterday, the 9th Circuit Court of Appeals reinstated the ban on development on over 40 million acres of wild national forests and grasslands.  The original Roadless Area Conservation Rule was issued by the Clinton administration in 2001 and protected 58.5 million acres.  Almost immediately, and for eight years, it was attacked and weakened by the Bush administration.  In 2005, the rule was reversed and states were allowed to petition to develop their own roadless areas management plans.  Upon this reversal the Sierra Club, along with several other environmental groups and Western states, sued the Forest Service.

This decision restores protections to all roadless areas except those in Idaho (which petitioned to develop its own management plans) and the Tongass National Forest in Alaska (which was temporarily exempted from the rule in 2003).  The Obama administration has pledged to "support and defend" the 2001 rule and recently issued a one year directive that any road-building project in roadless areas would require Secretarial approval.  Now the administration has the opportunity to uphold its pledge and fully restore protections to our nation's treasured wild places, including the Tongass.  These untouched areas are iconic and beautiful but, perhaps more importantly, they are free from the stressors of development.  Such areas are vital for wildlife and ecosystems as they shift and adapt to a warmer world.  This administration has shown that it takes global warming seriously and it should act to mitigate its effects on our public lands.

Please tell the Obama administration to take the next step and permanently protect our roadless areas.

Last Friday, Rep. Jim McDermott (D-WA), Rep. Tom Petri (R-WI) and 23 other co-sponsors introduced the Salmon Solutions and Planning Act (SSPA) in the House of Representatives.  The bill would provide timely and crucial information to agencies and Congress regarding the best ways to protect and restore populations of salmon and steelhead in the Columbia and Snake River Basins.  This bill comes at a time when taxpayers have spent more than $8 billion on recovery efforts since the Snake River salmon were listed under the Endangered Species Act in the 90s.  Despite those efforts, salmon runs continue to decline in the Columbia, Snake, and elsewhere.  These decreasing runs are having serious consequences in regional economies throughout Alaska, Washington, Oregon, California, and Idaho.

The studies conducted under the SSPA would come at a very opportune time.  Senators from Oregon and Idaho have called on the Obama administration to convene a roundtable discussion between stakeholders regarding the best way to proceed.  Simultaneously, the administration is reviewing a flawed Colubmia-Snake salmon plan.  All options are on the table, including removing the lower Snake River dam.  The unbiased and rigorous studies required by this legislation would be of incalculable value to these discussions.

On July 22nd, dozens youth and adults from the Sierra Club, the Student Conservation Association, the National Parks Conservation Assocation, the DC-based Earth Conservation Corps, and The Corps Network gathered at the US Capitol building to advocate for Congressman Grijalva's Public Lands Service Corp Act of 2009 (HR 1612).  The bill will expand opportunities for youth and young adults from underserved communities to gain valuable job skills, and to experience the outdoors while providing much needed service to our nation's public lands. 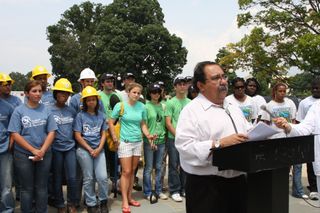 The bill expands on an existing program, the Public Lands Corps, and would be jointly administered by the Departments of Interior, Commerce, and Agriculture.  The Corps would focus on traditional restoration projects such as eradicating invasive species, rehabilitating campgrounds, restoring historic structures, and helping to conduct science and research projects in the park system.  However, the legislation would also make eligible projects that help reduce climate change stressors to public lands and that would facilitate the building of resilient habitats.  Passage of this legislation would encourage a new and diverse generation to follow the path toward green and service-oriented careers, and become the next generation of public lands employees and enthusiasts.

Two weeks ago, the Minerals Management Service announced that it would go ahead with an August lease sale in the Gulf of Mexico despite legal uncertainty.  The federal court responsible for the original decision has provided clarification by saying that the only lease sales which could not proceed were those that were scheduled in Alaska.

The court's original ruling back in April concluded that there had not been proper environmental review regarding lease sales in the Bering, Beaufort, and Chukchi Seas.  Amidst uncertainty whether that ruling applied to the entire 5-year leasing program, and thus all lease across the country, the Interior Department asked the D.C. Federal Court of Appeals for clarification.  Now that clarification has come and the MMS can continue under the current 5-year leasing programs for the entire continental United States.  Regarding the Alaskan leases, the Department of the Interior must report back to the court every 60 days to update it on the status of the environmental reviews being undertaken.

Scientists from the United States Geological Survey and the University of Washington compared records of tree density and diameter from the period of 1932-1936 against records collected between 1988-1999.  The results were startling: since the 1930s there has been a 24 percent decline in large-diamter trees.  This could have very serious long-term impacts.  Large-diameter trees are critical habitat for mosses, spotted owls, and orchids, among other species.  These trees generally produce more seeds and are more resistant to fires, making regeneration after a fire and forest growth much slower. The study did not specifically look at the causes of this decline, but climate change is a likely suspect.  According to USGS scientist Jan van Wagtendonk, the warming trend has increased the length of the dry season as well as reduced the winter snowpack.  This snowpack provides a good portion of the water that is necessary for the growing season.  The prolonged, dry summers don't help the situation and can make the trees more prone to pathogens and insects.