The Sierra Club has presented the Obama administration with a vision for how America's outdoors should be managed as they face the threats of climate change. The report comes in response to the administration launching the America's Great Outdoors initiative in the spring of 2010, where President Obama stated that our country needs a "21st century strategy for America's great outdoors, to better protect our natural landscape and our history for generations to come." Listening sessions have been held across the country to give Americans an opportunity to weigh in on the future of our wildlife and wild places. As part of that process, the Sierra Club presented 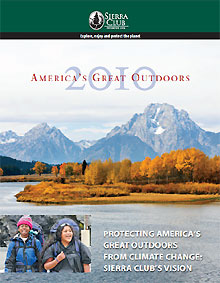 Our country's public lands face an increasing array of threats including climate change, habitat fragmentation, and a growing disconnect between Americans and the outdoors. This report highlights priorities such as protecting public and working lands, and reconnecting Americans, especially young people, with the outdoors. The Sierra Club hopes this report will confront and help solve the serious challenges posed by climate change, to our lands, landscapes, and habitats.

President Obama recently declared September, 2010 as National Wilderness Month, encouraging all Americans to visit and enjoy our wilderness areas, to learn about their vast history, and to aid in the protection of our precious national treasures. Obama has made significant effort while in office to promote and protect America's wilderness. Last year, he signed the Omnibus Public Lands Management Act, designating more than two million acres of wilderness for protection across the United States. In April this year, the Presdient launched the America's Great Outdoors campaign to develop a community based 21st century conservation agenda. Obama pledged to continue working with states, locals, and tribal partners to connect Americans with the outdoors. 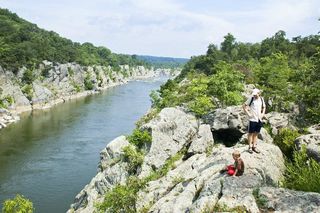 There is a possibility another wilderness omnibus bill will pass this Congress. As the 111th Senate winds down, lawmakers are hoping to move dozens of stalled public lands conservation bills by wrapping them into a single package. If signed into law, the bills would designate more than a half-million acres--an area the size of Rhode Island--of public land as federally protected wilderness or conservation areas and pave the way for new wild and scenic river designations. The Senate Energy and Natural Resource Committee has sent more than 60 conservation bills to the floor this session that would create new national parks, monuments, wilderness areas, and wildlife sanctuaries. Click here to read the Presidential Proclamation.