The waterways of the Pacific Northwest run deep. They unify the region that includes Idaho, Oregon and Washington by connecting the glaciers of its high volcanoes to its fertile valleys to the Pacific Ocean. Water coursing through streams and rivers is the lifeblood critical to urban and agricultural uses and to the vitality of aquatic ecosystems. Many iconic fish species in Idaho and the region such as salmon, steelhead, Pacific lamprey, bull trout and other native trout species, depend upon cool and plentiful stream flows to survive. But climate change is causing many stream flows to respond differently than they have in the past. 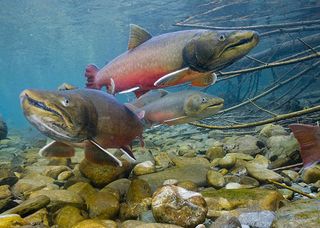 
“The complex work of conserving and recovering fish populations in the Pacific Northwest has grown substantially more challenging in light of our changing climate – this has become increasingly clear in the last several years with recent scientific assessments and projections,” said Dan Shively, the U.S. Fish and Wildlife Service’s Regional Fish Passage and Habitat Partnerships Coordinator.  “Robust and diverse fish communities require healthy watersheds and habitat; or more simply put, an abundance of cool, clean water." 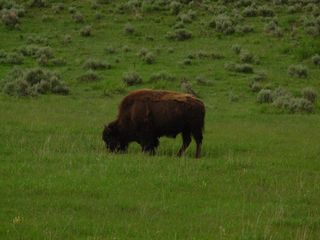 Last week, driving south down highway 89 to Yellowstone National Park, I was treated to a rare, and indeed historic sight: dozens of wild bison roaming free in the Gardiner Basin.

Winter is a hard time for bison in Yellowstone.  Though these iconic creatures have evolved to withstand much of the harsh winter weather and deep snows for which Yellowstone National Park is well known, in some heavy snow years, such as this one, hundreds of bison attempt to migrate out of the Park, as they did historically, to lower elevations in search of food.

But for many years, bison trying to migrate and find sustenance to survive the winter have been hazed back into the Park, captured and corralled, or shot at the Park boundary. Why?  Primarily because the state of Montana and some in the livestock industry fear a disease called brucellosis, which causes cattle to abort their young, will spread from wild bison to livestock.  And so each year bison are either hazed back into the Park when they attempt their historical migration to the west or north, or captured and corralled until spring, or shot.  Yellowstone bison, the only remaining genetically-pure bison population, is the only wild species confined to the boundaries of a national park.  There has never been a case of wild bison transmitting brucellosis to livestock (in fact, research shows that bison very likely first contracted brucellosis from cattle). And many more elk carry brucellosis than bison – and migrate freely – but you don’t see elk being shot at the Park boundary. 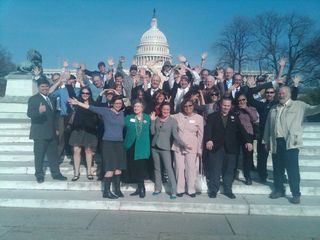 It’s not every week that activists visit Washington D.C. to advocate for wilderness in the Arctic National Wildlife Refuge, but when they do everyone knows about it.  As Washington D.C. celebrated the arrival of spring with its annual Cherry Blossom Festival, over 40 activists from across the US and Canada descended on our nation’s capital to experience democracy firsthand. They were not there to soak up the pink explosion of blossoms; they were there to protect some of the wildest country left in the world – America’s Arctic.  In over 80 meetings with key decision makers these citizen advocates carried the message that the Arctic is alive and must be protected for future generations.

For years, people from all walks of life and all corners of the country, have fought to protect the Arctic Refuge not just because it is special to wildlife but because it is sacred to Alaska Natives.  This spring we were lucky to be joined by members of the Gwich’in Steering Committee, who teamed up with activists as they walked the marbled halls of Congress.

Earlier this year President Obama unveiled a new, community-driven conservation and recreation agenda for America’s Great Outdoors. Shaped by an unprecedented national conversation, including listening sessions across the country, the agenda lays out a plan to better protect America’s water, wild lands, wildlife and important landmarks. It also calls for a strong effort to reconnect children, youth and families with the great outdoors.

The Sierra Club is answering that call this month as we work with the Children and Nature Network and other partners to support events urging people of all ages to get outdoors and experience nature. Over 500 events are registered so far and they all encourage people to play, serve and celebrate America’s Great Outdoors.

Learn more about our Let’s G.O (Get Outside) efforts and find out if there is an event near you this Earth Day.

Across California: A 530-Mile Trek from the Colorado River to the Pacific 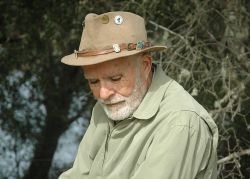 In 1826, my much-removed cousin Jedediah Smith, a 27-year-old fur trapper, led a band of 16 men from Utah to California, which was then part of Mexico. Now, 186 years later, and 47 years older than he was, I will be retracing part of Smith's route -- the part where he reached the nearly dry Mojave River. He was actually looking for the mythical Buenaventura River, which supposedly would connect the interior of North America to the Pacific Ocean, serving as a vein for commerce. Of course he never found it. My goal is different: I'll be looking to see how the different ecoregions from the eastern Mojave Desert across the mountains to the Pacific connect with each other.

Cousin Jedediah had only the sketchiest of maps, if any, whereas my companions and I will have almost too much information, thanks to things like GPS, topographic maps, and Google Earth. Thousands of articles, scientific papers, and books describe the areas I plan to cross. You can drive from the start to finish in a long day. So why walk it? Aside from the personal accomplishment, my larger purpose is to show that someone can walk across the heart of California on public and conservancy land, avoiding roads and highways, over an area that still looks natural. And it is through this personal connection with the land, during a two-month, 530-mile trek, that I hope to highlight the necessity of preserving and protecting what wildness remains. Not only that: If the habitats within this great wildness become cordoned off and isolated, they will eventually die of starvation.

That starvation will come about when connections are severed. For example, biologists have told me that the San Joaquin Valley kit fox population on the Carrizo Plain National Monument -- through which I'll pass -- could die out unless it maintains connections with populations to the north and south. Another example: Joshua trees in Joshua Tree National Park are dying off due to excessive summer heat; meanwhile, other groves of these picturesque spiny plants are extending west of the hottest deserts.

Beginning at the Colorado River near Laughlin, Nevada, on March 20, four of us will cross the Dead Mountains and head for Hole in the Wall in the Mojave National Preserve, which we'll reach in six days. Spencer Berman and Stacy Goss will leave the trek there. Four days later, Tom Landis and I will be at the strangely-named Zzyzx, now a center for desert studies, where Tom's wife Madeleine will join us.

Eventually, backed up by new supplies from my wife Letty, we'll reach the Pacific Crest Trail at Jawbone Canyon and take it south to the Tejon Ranch, probably the most vital ecological link between the desert, Sierra, San Joaquin Valley, and Southern California mountains and valleys. With kind permission we'll cross the Ranch and enter the Wind Wolves Preserve, which also greatly enhances connectivity among ecoregions. Then we're on to Bitter Creek National Wildlife Refuge, the Carrizo Plain National Monument, the Carrizo Ecological Reserve, and the Los Padres National Forest. We'll reach the Pacific in Morro Bay on May 1 or 4 ... or whenever we get there.

Cal, 74, a member of the Sierra Club for 42 years, is trekking 530 miles to highlight the threatened natural corridors between the Colorado River and the Pacific Ocean. Cal sits on the Sierra Club Santa Lucia Chapter Board, represents the Chapter to the national organization, and serves as a spokesperson for the Chapter on the Carrizo Plain National Monument. So, why is he doing this?

"To show that someone can walk across the heart of California on public and conservancy land, avoiding roads and highways, over an area that still looks natural," he says. "And it is through this personal connection with the land, during a two-month journey, that I hope to highlight the necessity of preserving and protecting what wildness remains. If the habitats within this great wildness become cordoned off and isolated, they will eventually die of starvation."