Secretary of the Interior Ken Salazar had barely made his way back to Washington, D.C. from his announcement at Grand Canyon, where he extended an emergency mining ban on one million acres of public lands in Grand Canyon’s watershed and established that ban as the Interior Department's preferred alternative, when some Arizona congressmen sought to stop it. Immediately, representatives Jeff Flake and Paul Gosar, both from Arizona, said they would seek ways to derail this policy. 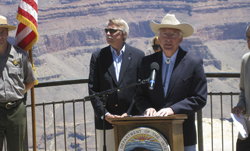 Secretary Salazar’s announcement on June 20th was welcomed by the Sierra Club and other conservation interests, scientists, local government leaders, businesses, tribal communities, and the hundreds of thousands of concerned citizens that submitted comments in support of these protections.  (See Salazar’s speech from Mather Point here.)  Rep. Raúl Grijalva (AZ-7) was on hand to herald the announcement as well; he has been working on a bill to make the action permanent.

Unfortunately, the U.S. House of Representatives is putting at risk the Grand Canyon, its waters, and wildlife.  They have included a rider in the Interior Appropriations bill (actually, there are many terrible riders in this bill) that will stop the Secretary from enacting the mineral withdrawal and protecting the Grand Canyon’s resources.  Riders like this are often used to promote legislation that would never advance as a stand-alone bill and that frequently include policies that are harmful to land, air, water, and wildlife.  This bill is loaded with them.

Please click here to ask your congressperson to oppose this and other harmful riders. They are bad for Grand Canyon and other public lands throughout the country, as well as our air, water, and wildlife.

Thank you for the article, I saw after the enlightened, my idea like you, just not good at expression