Shell Could Drill in Arctic by Next Summer 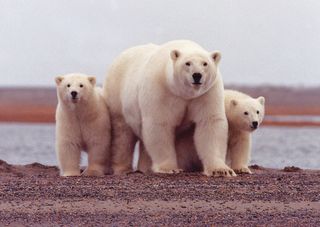 Last Thursday, the Bureau of Ocean Energy Management, Regulation, and Enforcement (BOEMRE) provisionally approved a proposal from Shell that would permit exploratory drilling in the Beaufort Sea as soon as next summer. The authorized plan is part of the most aggressive oil venture ever launched in the Arctic, and comes after a recent failure to pass industry safety reforms in the Senate. Conservation groups have condemned the approval, citing the scope of Shell’s proposal, the fragility of the ecosystem, and the lack of increased standards as a disastrous combination.

In total, the drilling plan approved last week and a similar plan under consideration would launch up to ten exploratory wells in the Beaufort and Chukchi Seas. The Arctic population of endangered bowhead whales migrates these waters annually, where they feed, rest, and nurse in the path of proposed drilling. Local environmental and indigenous groups are concerned about the impact that noise and disturbed ice floe will have on the whales, which are a crucial species for subsistence-practicing Alaskan Natives.

The risk of an oil spill poses an even greater threat to the Arctic’s sensitive landscapes. More than a year after the onset of the greatest environmental catastrophe in American history, Congress has failed to pass legislation to improve offshore drilling safety and ensure the prevention of future spills. Neither Shell nor the federal government possesses the capability to adequately respond to an oil spill, particularly during the region’s dark, harsh winter months.

Before drilling can begin, Shell must obtain a series of permits addressing emissions and potential disturbances to nearby whale, walrus, and polar bear populations. These may delay the drilling process, but locals and activists—who have contested the proposal for years—fear they are running out of legal alternatives.

Caribou grazing in view of the Beaufort Sea (Image: USFWS)

There needs to be more about this on the web. It is so frustrating what is happening to wilderness everywhere. Stop drilling go wind, solar and geothermal instead.

It would be terrible if Shell drills in the Arctic next summer. Right now Shell's rig in the North Sea outside of England is leaking oil. The plan to clean up? Just let the waves disperse it and it should be fine.