The Grand Canyon National Park will stay noisy from air tours, thanks to last minute secret maneuvers during passage of a federal transportation funding bill by Congress before their July Fourth recess.

The compromise legislation includes several anti-environmental measures pushed by Republican leadership in the House, but this provision was in neither the Senate nor House version before final negotiations started. The provision is very similar to legislation introduced earlier earlier this year by Rep. Paul Gosar (R-AZ) and endorsed by Arizona's Senators McCain and Kyl.

Ironically, this came immediately before the National Park Service was prepared to issue final recommendations on reducing air tour noise over the Grand Canyon. This followed years of agency noise studies costing $6 million and after gathering almost 30,000 public comments. 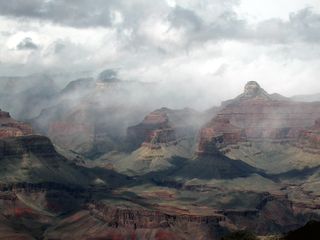 The Park Service plan was expected to extend quiet hours in the morning and evening, move air tour routes away from popular beaches, trails, and overlooks during certain seasons, and limit air tour numbers in the future.

"Congress locked into place the noise we have today at Grand Canyon," said Rob Smith, Senior Organizing Manager for the Sierra Club in Phoenix, Arizona. "They stopped the Park Service from protecting the natural quiet of our premier national park."

The law is now changed to allow half the park to have unlimited aircraft noise, and allow the rest of the park to hear air tour noise 25% of the time throughout the day. Plus air tour numbers can increase without limit into the future.

"President Teddy Roosevelt set aside this special place to protect its naturalness for future generations, but commercial interests dominated this time," said Smith. "The Grand Canyon should not sound like an airport."

Palph Lauren leather jewelry more clothing and various accessories have developed very complete, from head to toe, including eyeglasses, jewelry, handbags, belts, socks, shoes, etc., pay attention to all is a "lifestyle", it is leadingtrend, but not too trendy, with an affluent middle-class taste.

It is the best time to stock your wardrobe with the latest styles now.

Great job you people are doing with this website.http://www.nccparts.com/

I still don't know what I want to do in life, but I am realizing through my everyday experiences that I am slowly finding what makes me happy in life.
http://yikehua.myqblog.com/
http://viewmorefor.onsugar.com/
http://yakadfeo.bloggd.org/

I really liked your blog article.Much thanks again. Much obliged.