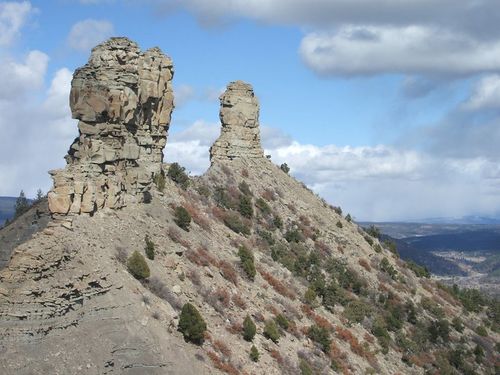 From the seeming morass of Congressional gridlock, encouraging sprouts have appeared in recent months. Growing from grassroots advocacy and collaboration, a number of new ideas for administrative designations have emerged, bent on permanently protecting important natural and cultural values, as well as wild land segments of Colorado federal lands.

Closest to fruition may be the Chimney Rock Archaeological Area, a 4,100 acre cultural treasure near Pagosa Springs and a strong candidate as a new national monument.

Ancestral Pueblo Indians built more than 200 homes and buildings on the steep slopes below Chimney Rock’s twin rock spires. Among them is the highest Chacoan site known, the Great House Pueblo. From the Great House Pueblo the moon can be seen to rise between the rock spires during the Northern Lunar Standstill, an occasion that happens only once every 18.6 years.

"Chimney Rock's spectacular natural setting and its significance as an ancient astronomical ‘observatory’ make it fascinating to visitors and priceless for present and future archaeological study. For these reasons alone it deserves protection as a national monument,” said Carol Stansfield, teacher and longtime Colorado Sierra Club member. “But Chimney Rock was also part of a much larger phenomenon: the entire Chaco culture. Something amazing was going on at Chaco, and Chimney Rock plays an important role in the Chacoan mystery.”

Chimney Rock was added to the National Register of Historic Places in 1970, and it attracts thousands of visitors and students annually, yet it lacks protection and adequate funding for upkeep. A national monument designation could bring this special place the resources, recognition and protection it deserves.

It is the best time to stock your wardrobe with the latest styles now.

Yes, I also visited over there and gain plenty information and statistics about Colorado. I am able to provide full statistics to other colleague and friends. Yes,Hope for Colorado’s Chimney Rock

Because you won’t find these tips, ideas and resources anywhere else on the planet.

Wow, nice post,there are many person searching about that now they will find enough resources by your post.Thank you for sharing to us.Please one more post about that.

Nice posting, I like the way how you express yourself. Keep up the good work.

I am very impressed with the book and Shakti business model... what a remarkable success story! Nancy has done a great job explaining the challenges of starting a business in a rural environment.. she has made the late 90's "pionneers" to come alive and while reading I could feel their pains and the obstacles they encountered... very smart, brave and motivated people! Thank you all for showing us that there is "another way" of doing business and thank you Nancy for being the perfect story teller.