Victory! No Fracking in the Hoback 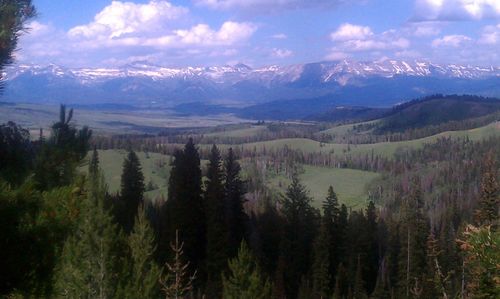 Proposed site of an industrial gas field in the Wyoming Range

It really can make a difference.   One by one – each email sent, letter written, call made – can add up to a huge victory.

And that’s exactly what happened recently when Houston-based Plains Exploration and Production Company (PXP) finally agreed to sell its oil and gas drilling leases in Wyoming’s spectacular Upper Hoback basin to the Trust for Public Lands for $8.75 million.  With this deal, the leases will be  permanently retired and can never be sold again. This is fantastic news, and I want to thank each of you who took action and helped to achieve this important victory.

For years, the Upper Hoback’s fate has been mired in controversy over PXP’s plans to drill up to 136 natural gas wells in the pristine basin, using the dangerous hydraulic fracturing, or “fracking” method. Thousands of hikers, hunters, anglers, conservationists and many others have been fighting the proposed drilling project at every step and working to keep the Hoback intact.  Over 14,000 Sierra Club members and supporters from across the country weighed in on Forest Service analyses of the project; many others attended public meetings, outings to the proposed site, or other events and spoke out to oppose drilling.  This victory could not have happened without you and many others who care about keeping our remaining wild places intact.

We’ve long said that the Upper Hoback is “Too Special to Drill.” An integral part of the Greater Yellowstone ecosystem (GYE), the Upper Hoback is home to the only known population of threatened Canada lynx in the entire GYE, and provides crucial habitat and migration corridors for moose, elk, mule deer and many other species.  Recreation opportunities on this wildlife-rich area of the Bridger-Teton National Forest, just 35 miles south of Jackson and Grand Teton National Park, are unparalleled.

We have a lot to celebrate today, but the work isn’t quite finished yet.  Of the $8.75 million needed to buy out PXP’s leases, $4.5 million is in hand so far. The Trust for Public Lands needs to raise an additional $4.25 million by December 31 in order to permanently retire PXP’s leases. Every gift helps, whether it's $10 or $10,000. 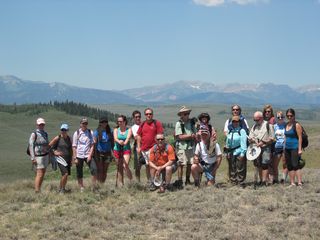 Last June, with campaign volunteer John Spahr, I led an outing to the proposed drilling site (photo left). While standing on a ridge looking out over the basin, I asked people to visualize over 100 gas wells, roads and all the related drilling infrastructure there,  rather than the peaceful and beautiful vista before us. There was a lot of head shaking, and questions from folks about how they could help. On the hike out, I was struck yet again by how, once people experience a place like the Upper Hoback and know what’s at risk, they will step up again and again to protect it.  I’m honored to be a part of this victory, along with thousands of others who took a stand and said ‘no’ to drilling in this special place – not now, or ever.

Wonderfull my friend , i really like it , wish you continue showing us many beautifull Pictures like those one

Nice pictures!! Looking beautiful!! It inspires me to have a trip.