« Islands Worth Celebrating! | Main | From Valdez to BP: A Corroded Promise in Kalamazoo »

From Valdez to BP: You Can't Make This Stuff Up

Across America, oil spills have wrought havoc on our land, wildlife, and the health of our families and communities. March 24 and April 20 represent the anniversaries of the worst oil spills in U.S. history, the Exxon Valdez and the BP Deepwater Horizon spill, respectively. Together, these events dumped more than 5.65 million barrels of dirty oil in U.S. waters.

In light of this toxic anniversary, the Sierra Club presents a three-week look at oil companies' poisonous legacy across our nation. 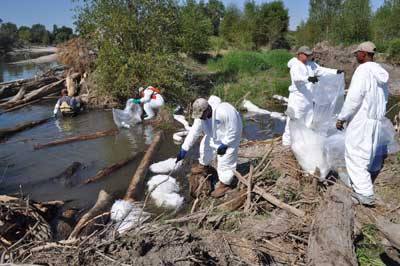 How many times do we hear it: Big Oil executives assure the nation that their company holds "safety as the highest priority," right around the time a devastating spill is caused by their own negligence.

Well, it appears that someone believes their empty rhetoric. The National Safety Council awarded ExxonMobil the Green Cross for Safety medal on Tuesday, just four days after Exxon's Pegasus pipeline burst, spilling 12,000 gallons of dirty fuel in an Arkansas community. It's been a big week for Exxon, which was hit with $1.7 million in proposed fines last week by the Pipeline and Hazardous Materials Safety Administration for spilling 1,500 gallons of heavy crude into the Yellowstone River in 2011.

What great acts of safety and environmental stewardship can we expect in the future from the Green Cross award-winners?