Who doesn't like a party? Especially when it celebrates the designation of our country’s newest National Monument -- one that protects the lands, waters, and wildlife of the San Juan Islands. Just off the coast of Washington State, I recently traveled to the islands to attend an event with a host of elected officials, business owners, recreationists, and conservationists.  Friends came together to thank the Obama administration for designating the new San Juan Islands National Monument and to celebrate a long-fought-for victory. 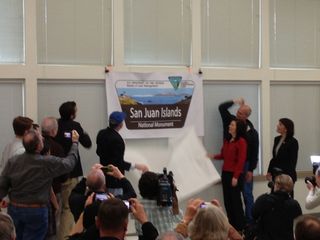 National monument status will permanently protect precious lands in the San Juan Islands. These sites, already managed by the Bureau of Land Management (BLM), include recreational areas beloved by locals and visitors, cultural sites used by local tribes for thousands of years, historic lighthouses, disappearing habitat, and much more. Protecting recreational use of these beautiful public lands will ensure tourism and outdoor recreation continue to have a positive impact on our economy. The Outdoor Industry Association estimates that recreation -- hiking, camping, paddling, and climbing -– contributes $22.5 billion to Washington's economy and supports more than 226,000 jobs.

National monument status assigns these lands to the BLM's National Conservation Lands System, which requires the BLM to protect and preserve these lands, directs the agency to work closely with the local community on a management plan, and prevents potential exploitation, development, or sale of these sites. The Conservation Lands assignment could also have been made by Congress by designating a national conservation area (NCA). Senator Cantwell, Senator Murray, Representative Larsen, and Representative DelBene introduced legislation to do just that in both the 112th and 113th Congresses. Congressional gridlock has long prevented action on this and more public lands legislation. As a result, the Washington State delegation joined the community in supporting presidential action to accomplish our goal of permanent protection of BLM lands in the San Juan Islands with a strong community voice in their management.

Many of Washington State's congressional leaders were on hand at Monday's event, Representatives Larsen and DelBene highlighted the economic opportunities that come from conservation designations, while Senator Cantwell spoke of the importance of the designation for future generations and the value of local input in the process. She noted that just because the land was under the ownership of the BLM didn't mean it would be protected from development. "We had a choice," she said. "Do we want to toss it up for the future to see what this land might become, or do we want to say it's so special that it will be preserved? The community was loud and clear. They wanted the latter." She also highlighted that national monument designations don't happen overnight.

Efforts to protect lands in the San Juan archipelago began in earnest in 1989, when a hiker noticed trees on the backside of Chadwick Hill marked for logging. Supporters spent a week gathering 600 signatures to stop the logging operation, but the group was told it needed to create a larger vision, which has now been included with the 450 acres on Chadwick Hill. About four years ago, the group realized that the rest of the BLM land in the islands was not afforded any protections. The effort to create a national monument made of these lands came from that moment, Cantwell recounted.

Senator Cantwell said of the campaign to create the monument, "It may have started in a living room on Lopez Island, but it traveled all the way to the Oval Office." 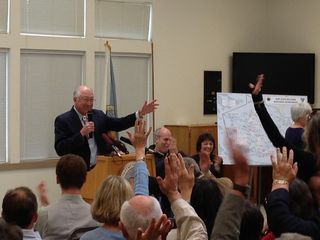 This is what made this celebration even sweeter -- it is important to remember that a group of committed individuals can still come together and protect special places; and that this protection is good for our economy and even better for the lives of our future generations. The people of western Washington know this and they are thankful for the actions of the Obama administration and the Department of the Interior.

Secretary Salazar asks for a show of hands from all those "happy" about the new monument (photos: Dan Ritzman)

Posted at 08:57 AM in America's Great Outdoors, lands | Permalink