The Lacey Act: A Sharp Tool From The Climate Action Shed 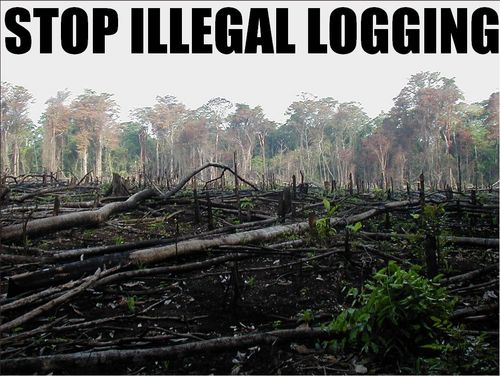 President Obama couldn’t have been more explicit in 2013 in voicing America’s need to address climate disruption. He’s said so twice already this year in high-profile, public speeches. The first was in January, during his second inaugural speech, and the second was in February’s 2013 State of the Union address, in which he said, “for the sake of our children and our future, we must do more to combat climate change.”

As urgent as it is to put in place new laws and policies to reduce greenhouse gas emissions that cause climate disruption, there are a few very effective laws on the books already that can help slow the climate chaos. The oldest and one of the most effective bills out there is one that you’ve likely never heard of: the Lacey Act.

Signed into law in 1900, the Lacey Act instituted prohibitions and penalties on the import of illegally trafficked wildlife species. When Congress expanded the law in 2008 to cover plants, the U.S. became the first country to ban illegal trade of timber and wood products. The Lacey Act and its 2008 amendments are now one of the most powerful existing tools we have to reduce deforestation and combat climate disruption.

Illegal logging and trade in illegally harvested timber harm the environment and exacerbate climate disruption. Trees are the Earth’s natural filter for carbon dioxide, and use the greenhouse gas to produce oxygen. Deforestation itself contributes to as much as 17 percent of greenhouse gas emissions worldwide. Introducing excess carbon dioxide into the atmosphere from deforestation-related activities and simultaneously removing the Earth’s natural carbon dioxide recycling system produces doubly damaging effects.

The illegal timber trade not only wreaks havoc on the environment, but also on developed and developing country economies. Trade in illegally harvested timber costs developing countries much-needed revenue from unpaid taxes and royalties. Illegal logging also depresses global timber prices and undercuts legitimate trade by businesses acting within the confines of the law. According to World Bank estimates, the market value of global annual losses from illegal logging in public lands is over $10 billion, with an approximate loss of $1 billion annually to U.S. industry.

Prior to the 2008 amendments to the Lacey Act, the U.S. was a “no-questions-asked” market for tropical timber, facilitating imports of illegally harvested wood. The 2008 amendment changed the landscape, requiring importers to report the species and country of harvest of the wood they are importing to help prove the legality of the wood. The 2008 amendments also include significant deterrents to importing illegally harvested wood by, for example, authorizing seizures of illegal wood products and instituting a more comprehensive criminal and civil penalty system for offenders.

This process has led businesses to shift practices that have helped to ensure legal trade in wood. Since the U.S. is the largest consumer of wood products, the ban and its penalty system has already worked to curb illegal timber trading by 20 to 30 percent worldwide - an outstanding accomplishment that benefits our environment and our economy.

Some of the world’s greatest and most vital forests are currently being threatened by illegal exploitation. The Lacey Act not only helps save these woodlands from destruction, but it also supports indigenous communities who are protecting their lands from illegal encroachment. Time and again, experience has shown that when indigenous peoples and local communities have secure rights to their land, forests are better protected from deforestation and its associated greenhouse gas emissions.

Because of these and other benefits, the Lacey Act has received international recognition and has served as a model for other countries. In 2011, the United Nations and the World Future Council named the Lacey Act one of the world’s top three forest conservation laws in 2011.  And, both Australia and the European Union have passed legislation similar to the Lacey Act, further helping to protect our planet and its people.

The U.S. must continue to lead on climate action, as the President has called for and the American public has demanded. In order to lead on climate, the U.S. government should continue to enforce existing laws like the Lacey Act. With a small investment, the Lacey Act can offer significant returns that benefit our planet and its people. The Sierra Club looks forward to working with our members and with the Obama Administration to support the effective implementation of this landmark legislation.