Hands Across the Sand: Ordinary People Unite Against Dirty Fuels

In a nation (and world) where Big Oil,Gas, and Coal are constantly pushing the government and citizens to expand drilling; where they seek to build huge pipelines with little regard for the safety of the people and environment around them; where they irreparably damage our landscape and water through mountaintop coal mining; where offshore oil spills wreak widespread havoc on coastal communities dependent on clean, safe shores for their livelihoods and health -- people are fighting back.

At 100 events in 18 states and 9 countries, thousands of participants joined hands to protest the expansion of dirty and dangerous offshore drilling and other dirty fuel development. May 18, 2013 marked the fourth annual “Hands Across the Sand/Land” event, where people drew a line in the sand to protect our marine environment, our air, our water, and coastal economies everywhere.

“In the Southeast, the economics of offshore drilling just don’t make sense.  Coastal tourism and fishing generate billions of dollars every year and employ hundreds of thousands of people in our region.  Jeopardizing those industries for high-risk offshore drilling would be a grave mistake.  Offshore wind energy, on the other hand, could create thousands of jobs without the huge risks of drilling,” said Chris Carnevale, Coastal Climate and Energy Coordinator for Southern Alliance for Clean Energy. 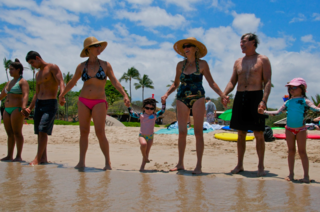 In Florida 10,000 Floridians representing 60 towns and cities and over 90 beaches joined hands to protest the efforts to lift the ban on oil drilling off the shores of Florida.  Other concerned Americans came out to beaches from Hawaii to New York to show leaders like President Obama the breadth of opposition to new fossil fuel exploitation and support for a clean energy economy rooted in energy efficiency and clean, renewable energy solutions, such as wind, solar and geothermal.

Begun in 2010, Hands Across the Sand expanded nationally and globally in response to the April 2010 BP Deepwater Horizon offshore rig explosion and spill, the largest marine oil spill in history (at 210 million gallons). The gathering in response to this catastrophe became the largest of its kind, with events in all 50 states and in 42 countries worldwide.

According to Hands Across the Sand:

“This movement is not about politics — it is about the protection of our coastal economies, oceans, marine wildlife and fisheries.  It’s about preserving our precious drinking water, air and food.  The damage that continues to happen in offshore oil drilling accidents, the dangerous process of hydraulic fracturing, the tragedy of the Alberta tar sands mining, mountain top removal mining and the continuing proliferation of coal fired power plants are a threat to all of the above.”