The George Washington is a special forest! Don’t Frack it Up! 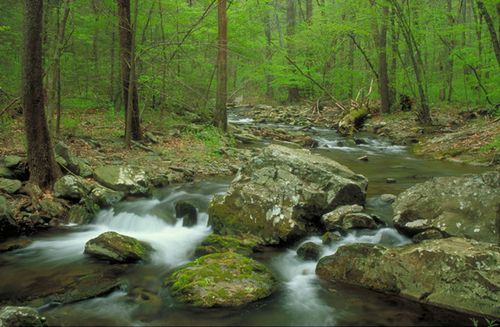 National Forests belong to all Americans. Unfortunately, the Forest Service has too often put the short-term interests of extractive industries ahead of our nation’s long-term ecological and economic well-being. But two years ago, the agency made a forest management proposal that was hailed by local businesses and conservationists alike: It would prohibit horizontal gas drilling in the George Washington National Forest, a beautiful and historic recreational forest that embraces the rural Shenandoah Valley of Virginia. But now, under intense pressure from the gas industry, the Forest Service is considering changing its mind.

The George Washington National Forest has a rich history of providing economic, recreational, and environmental benefits to residents of Virginia and West Virginia. The GW is the largest national forest in the East, and its million-plus acres and nearly 2,000 miles of hiking trails provide great opportunities for camping, hunting, biking, fishing, and a host of other recreational activities. It provides clean drinking water for more than a quarter-million people in nearby towns and communities, and its waters feed the James and Potomac rivers, which provide drinking water for millions living in and around Richmond, VA, and Washington, DC. It’s also a major driver of tourism in Virginia, where outdoor recreation generates $13.6 billion annually and supports about 138,000 jobs. In short, the GW directly affects the lives and livelihoods of a great many people in the state and region.

So when the Forest Service released a draft plan for forest management in May 2011, local, regional and national groups applauded the decision to prohibit horizontal drilling, a decision which would limit dangerous, high-volume hydraulic fracturing in the forest. Hydraulic fracturing, or fracking, is a process in which drilling companies inject millions of gallons of water, chemicals and sand deep underground at high pressure, to break shale rock and access the gas underneath. Such fracking could contaminate the forest’s pristine waters, which support not only great fishing but also farmers and agricultural interests in surrounding counties. Meanwhile, the large-scale industrial activity necessitated by fracking would create an enormous blight on the currently breathtaking forest landscape, which has never been drilled for gas. Ninety-five percent of the more than 53,000 public comments on the draft plan supported the commonsense ban on horizontal drilling, underscoring just how special this forest is to those who rely on it for drinking water, recreation, and economic well-being.

After the public comment period ended in October 2011, the Forest Service started to waver. Facing increasing pressure from the gas industry, which wants desperately to lease land and drill for gas throughout the East and in the GW, the Forest Service has continually delayed a finalized management plan, which it originally planned to release last spring. Meanwhile, local groups—including the Shenandoah Valley Network, the Southern Environmental Law Center, and the Virginia chapter of the Sierra Club—have been pushing back, urging the Forest Service to keep horizontal gas drilling out of the GW.

More than a year after the Forest Service had indicated it would announce a finalized plan, the oil and gas industry continues to lobby heavily in support of drilling and fracking in our nation's forests, including the George Washington. But National Forests belong to all Americans, and it’s in our nation’s long-term environmental and economic interests to conserve them. A decision on the GW could come any day, and the Administration needs to hear from you. You can support the protection of the George Washington National Forest by joining with the Virginia Chapter, other residents of the Shenandoah Valley, and national forest advocates nationally to urge Secretary of Agriculture Tom Vilsack—who oversees the Forest Service—to stand up to oil and gas industry pressure and protect this irreplaceable forest.