« Why Backpackers Do It | Main | Beyond the Arctic, Climate Change in Oregon »

Beyond the Arctic, Climate Change in New Mexico

As the climate changes, the Arctic is melting twice as fast as the rest of the world. But that doesn't mean that the rest of the country is escaping the effects of climate disruption. In fact, climate disruption can be felt far beyond the Arctic. To highlight the impacts of climate change both in the melting Arctic and across the country, this week exiled (costumed) polar bears will be visiting other communities that are also feeling the heat. You can follow the tour online here. Read on for a glimpse at what climate disruption means for people in New Mexico. 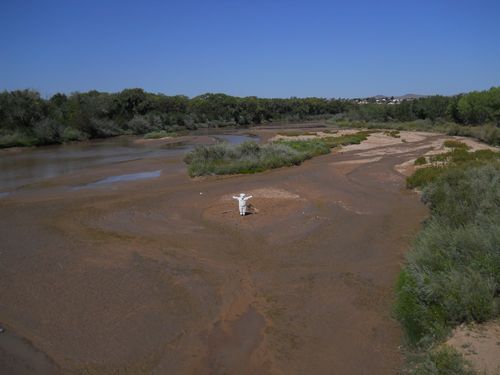 Dry Rio Grande
Earlier this summer, driving through northern New Mexico was eerie - familiar hillsides of pinon juniper and grass, once relatively green in this high desert ecosystem, were reduced to hills the color of sand. I grew up in New Mexico, and I have never seen it this dry. The landscape outside of my hometown of Santa Fe was never the color of dunes, until now. Earlier this year it was reported that all of New Mexico is officially in drought, and three quarters of the state is in "severe" or "exceptional" drought. In June, it was reported that total precipitation averaged across New Mexico was less than 8 inches, the lowest since record-keeping began in the late 1800s. The droughts have been exacerbated by record-setting heat. 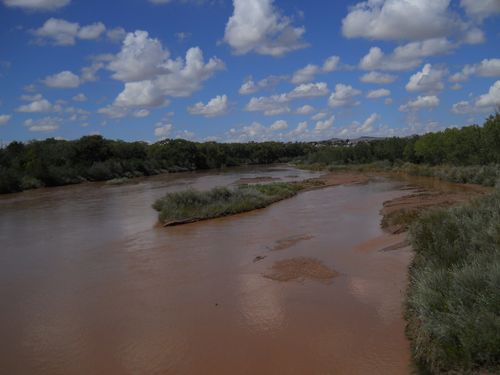 flooded Rio Grande
Then the intense rains came this month in September. Bone-dry areas were suddenly flooded with water, washing away soil and flooding communities and national parks. Some areas experienced over 9 inches of rain in a short amount of time. A few days in mid September saw intense rains that crested bridges, knocked out power, and created hazardous driving conditions throughout the state, with precipitation levels breaking a record set in 1929. In New Mexico, with water it is often feast or famine; earlier this year the tomatoes in my garden began to whither in the heat, and now my roof is constantly leaking from intense barrages of water and hail.
Water is not the only problem. Recent years have also seen increases in intense forest fires. For example, in 2012 the Whitewater-Baldy Complex Fire burned close to 300,000 acres. Homes burned, and communities and watersheds were destroyed.


While it is impossible to attribute any one event to climate disruption, these events point to disturbing trends in New Mexico: aggravated drought, extreme precipitation, and record heat and fires. Are extreme conditions, fires and weather events the new norm in New Mexico?