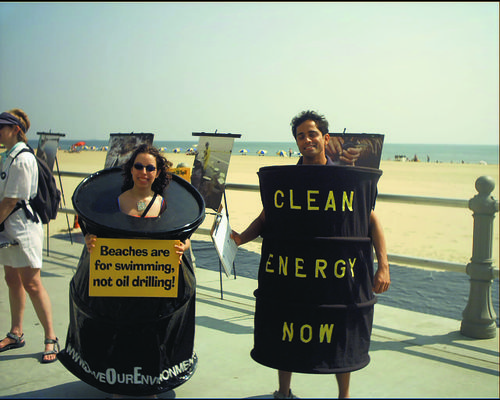 It's become increasingly clear in recent years that fossil fuels contribute to climate change.  The 2013 IPCC report states with 95 percent certainty that we are warming the planet.  On top of that, America’s frenzied efforts at domestic drilling have brought more domestic spills and pollution, while leaving us dependent on foreign oil and hostage to high gas prices.   Progress towards renewables is not as robust as it could be, either.  Dominion Energy’s announcement that it won’t build a planned wind farm in Virginia anytime soon has rightly disappointed climate activists.  The U.S. is already home to more offshore drilling than any other country, and leasing in the Atlantic Ocean’s Outer Continental Shelf will do much more to pollute our water and air than it will to access an abundance of oil or decrease our fuel costs.

By the numbers, the brief history of experimentation with Atlantic offshore drilling is not a very successful one.  According to the Bureau of Ocean Energy Management, between 1976 and 1983 there were nine lease sales held in the Atlantic Outer Continental Shelf; the result was 51 drilled wells.  Of these, only eight wells in the Hudson Canyon area discovered anything.  But falling oil and gas prices, a lack of efficient deep-drill technology, and complaints from residents resulted in a 1990 Congressional ban on drilling in the region.  Subsequently, the state of North Carolina bought its offshore land back for a hefty $600 million—double what energy producer Mobil Oil had paid.

Despite the money and time invested—and wasted—in unsuccessful Atlantic exploration, interest in drilling off the coast persists.  Today, the Department of the Interior can only quantify 2 billion barrels of Atlantic oil with 95 percent confidence.  That’s about enough to satisfy U.S. demand for three months.  Estimating with a 5 percent confidence, an educated shot-in-the-dark, that number only climbs to 10 billion barrels.  Atlantic drilling is an unsurprisingly risky investment.  It would take almost a decade for any oil production to come online, would devastate fishing and tourism, and may not even generate enough oil to affect global markets.  In fact, given that our proven reserves make up two percent of the world’s supply (while we consume 24 percent), and that unconventional sources of oil are still expensive to refine, our ability to dramatically alter markets is unlikely.

Not convinced?  Drilling operations elsewhere have been no cure for America’s energy woes.  The Bush Administration, between 2001 and 2007, offered more than 340,000,000 acres of leases in the OCS, selling 33,000,000.  As a result, the U.S. has a fleet of 1,928 oil drilling rigs, while only 1,512 rigs operate elsewhere in the world.  The number of platforms has done little to keep gas prices from soaring over the past decade.  They have contributed to emissions and spills, though.  U.S. drilling operations spill and leak 800,000 gallons of oil annually.  In 2005, according to the Southern Alliance for Clean Energy, storms Katrina and Rita destroyed huge amounts of oil infrastructure, including 113 oil platforms and 457 pipelines.  The result was 9 million gallons of petroleum products stewing in the Gulf of Mexico.

Instead of developing dirty and dangerous drilling, the U.S. should be seeking more effective returns from clean energy sources.  The East Coast should never have to experience a large-scale tragedy like the Gulf and the Pacific Coasts have, so that oil companies can eke out higher profits.  Instead, it should deter offshore drilling by investing in renewables, especially offshore wind.  Remember that at best, Atlantic drilling briefly pushes back that day when we run out of oil.  At worst it results in a weakened tourism industry on an East Coast blighted by air and sea pollution.  The only way to mitigate that pollution is to keep it in the ground, where it belongs.