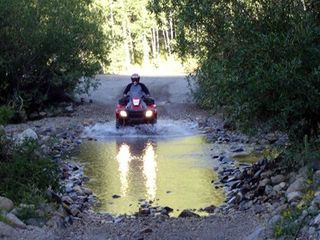 This weekend a group of protestors embarked on an illegal All-Terrain-Vehicle ride through Utah's Recapture Canyon. The event was billed as the next showdown in a series of challenges to our public lands and government, a sort of continuation of the failed Sagebrush Rebellion of the 1970s and 80s.

As with the situation with Nevada rancher Cliven Bundy (who owes the federal government more than $1 million in grazing fees - fees that all the other ranchers in the area pay), protesters conveniently ignored the fact that access is actually allowed in the canyon, just not with motorized means in part because two men created an illegal recreational vehicle trail through the canyon, destroying Native American artifacts and sacred sites in the canyon.

While the protesters' intent may have been to take a stand against federally managed public lands, the event actually served to underscore the need for protecting our country's cultural and natural treasures on public lands.

Our public lands belong to all of us. We all share a responsibility to protect these lands for their great beauty and rich history. Every American is part owner of our national parks, national monuments, and other public lands - including Recapture Canyon. They are managed so that everyone can share use and access in different ways. Yet this weekend, the irresponsible actions of the anti-public lands protesters prevented a group of veterans and Navajo faith leaders from participating in a healing event sponsored by the Sierra Club and the Bureau of Land Management in Recapture Canyon. These illegal protesters infringed on the rights of other Americans who legally own and use our public lands - in this case on the rights of those who have fought to defend places like this.

Despite the rhetoric, breaking the law and crushing important archeological and cultural sites is not patriotic. Ask the veterans who were supposed to be a part of the healing ceremony; they know about patriotism.

The true motivation for much of the effort to "take back" public lands is not actually a love of country, but a love of money and the real force behind selling off our public lands is not the Cliven Bundys of the world, but well-funded, big industry like oil, gas and coal. Behind their populist message is the truth that the only access these special interests really care about is their own.

Efforts to seize federal public lands and lease or sell them to the highest bidder, both locally and in Congress, are not at their heart about improving the visitor experience, but about avoiding environmental protections that would prevent damaging mining, drilling, fracking, and logging. And while a handful of private corporations would benefit from exploiting our public resources, Americans would pay the cost in lost recreation opportunities, degraded water and air quality, and the forfeit of a sustainable outdoor economy. Simply put, a few gain a lot and everyone else loses.

We cannot allow special interests to usurp our public lands under the guise of patriotism and states' rights. America's public lands are some of our country's greatest attributes and are a vital part of both our history and our future. We should not allow special interests to run roughshod over the uniquely American idea of holding places in trust for all Americans. We should all be able to explore, enjoy and pass on to our children the public lands that are our shared heritage.

-- Dan Chu, Director of the Sierra Club's Our Wild America Campaign. Note: Above photo is a stock image of an ATV, not an image from the illegal protest.