Obama's Gift to Us in the Land of Enchantment 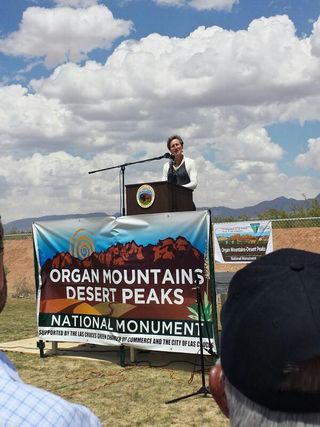 On Wednesday, May 21, President Obama gave a gift to all Americans, proclaiming nearly 500,000 acres of the Organ Mountains- Desert Peaks range as our nation's newest national monument.  Home to wildlife, cultural and historical treasures, the Organ Mountains tower 9,000 feet tall just east of the southern New Mexico town of Las Cruces.  This unique natural treasure is now permanently protected thanks to more than ten years of hard work by the people of Las Cruces joining with groups such as the Sierra Club.

Last Friday, I joined the Las Cruces community to host Secretary of the Interior Sally Jewell on a high school field with the Organ Mountains as a backdrop. I was struck by the great diversity of supporters in the crowd of over 700. Tribal and religious leaders, local business owners, ranchers, farmers, hunters, backcountry horsemen, Sierra Club volunteers, elected officials, local artists…this is the embodiment of land conservation in the twenty-first century.

Our public lands get protected when people are brought together by their common love for a place that embodies their community's pride and identity. State and federal public servants are valuable partners in a common cause to steward our lands, water, and wildlife. Creating strong community-based efforts to protect special places makes old land-use conflicts melt away.

The President has now designated eleven new national monuments, totaling over 750,000 acres of priceless historic, cultural and ecological treasures. Over the remainder of his Presidency, he can designate another four million acres of our nation's most breathtaking landscapes as national monuments.  Places such as the Boulder White Clouds in Northern Idaho, Berryessa-Snow Mountain in Northern California, and public lands surrounding Canyonlands and Grand Canyon National Parks in Utah and Arizona. Each of these places has strong support by diverse coalitions of community leaders and is ready for new monument designations.

Our national monuments, national parks, wilderness, and other federally-protected public lands are places where we come together as a nation, to share experiences, forge new friendships, and reaffirm our connection to the great outdoors.  President Obama couldn't have said it any better when he signed the proclamation for the Organ Mountains-Desert Peaks National Monument, "I have protected millions of acres of public lands…and I am not done yet!"

Posted at 06:57 AM in America's Great Outdoors, lands, wildlife | Permalink