The National Climate Assessment and Our Arctic Future 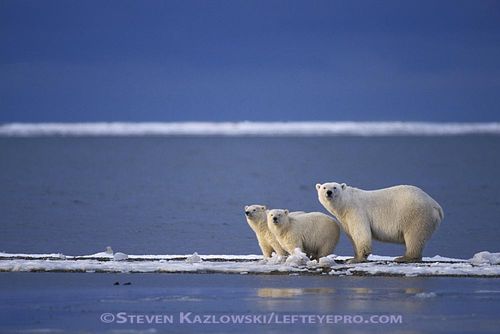 We all remember being a kid and playing connect the dots. As adults we can connect the dots on climate change in the Arctic, and when we do we can see a pretty bleak picture taking shape.  A new piece of that picture came into focus today with the release of the National Climate Assessment, the nation's foremost comprehensive, peer-reviewed analysis of the impacts of climate disruption, which tells us that climate change is happening now and it is primarily caused by human activities. The report also draws the link between climate change and extreme weather and the threats to human health, infrastructure and potential impacts to wildlife across the country.

This is just the most recent dot in a picture that started to take shape on March 24, when with little fan-fare and little notice from anyone except polar bears, specialized scientists, and total Arctic nerds -- the Arctic sea ice hit its annual maximum extent and began melting; where it will stop nobody knows. This year was the 5th smallest maximum sea ice recorded extent, another low in the recent string of record setting ice minimums. Taken together with the shrinking thickness of the ice, the story is even more alarming. More than half of the Arctic sea ice has vanished over the past 30 years.

As the sea ice melt began, the Intergovernmental Panel on Climate Change (IPCC) released a report examining the impacts climate change has on our current and future environment and what we must do to prepare. The report found that climate disruption is already occurring on every continent and in every ocean. Our leading scientists are telling us that we must act now to avoid the worst effects of climate disruption.

But it doesn't stop there. The pollution from oil-drilling activities and oil-burning would coat Arctic ice surfaces with black, heat-absorbing soot, further speeding the melting of ice. Since the Arctic acts as a refrigerator for the Northern Hemisphere, the chain of reactions would continue with further changes like those outlined in both the National Climate Assessment and the IPCC report.

Just last month the Alaska District Court ordered the Federal Government to reevaluate their current leases in the Arctic Ocean. And the big question is what actions will the Obama Administration take and what picture of our future will emerge?

Connecting these dots, the need to take action to protect the Arctic, and consequently the climate, is paramount. It is plain to see that climate disruption is affecting the Arctic in ways we could not predict, and adding irresponsible companies and risky industrialization will tip it over the edge.  Now we must do something to protect these waters, wildlife, and communities.

The Arctic Ocean, where the sea ice meets the northern edge of the continent, is home to polar bears, millions of migratory birds, beluga whales, endangered bowhead whales, hundreds of thousands of caribou, and more. It has supported traditional Alaska Native subsistence lifestyles for centuries and continues to inspire wonder in people across the country.

The Arctic is the last place we should be drilling for oil. We have seen Shell Oil fail in 2012, we have heard the challenges and effects of climate disruption, and now we must do something to fight climate change, protect Arctic wildlife, and move our country beyond fossil fuels.

The Obama administration has the opportunity right now to begin taking the lead in keeping dirty fuels in the ground in the Arctic and creating a picture of a clean energy future for our future generations.

The Interior Department is currently starting the process of reconsidering Shell's leases in the Arctic's Chukchi Sea.  The administration should look at the full picture as it considers the existing leases, and looking to the future it should place a moratorium on Arctic Ocean leasing.  An effective climate strategy requires that the administration take action in the Arctic.