A Haven for Ancient Turtles 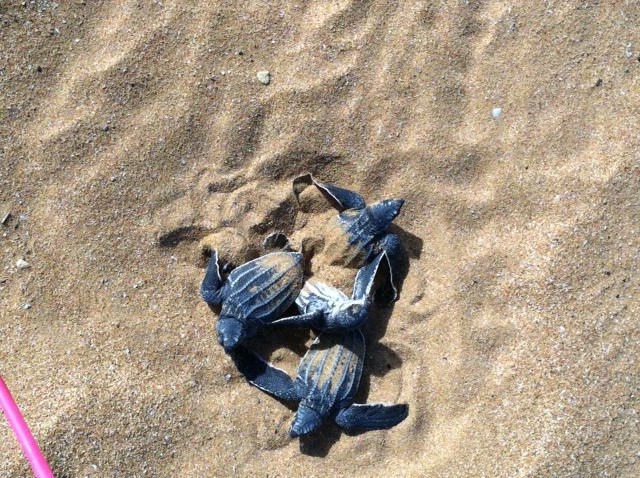 "This stretch of beach is where Leatherback turtles lay their eggs, and the other stretch of beach is where Hawksbill turtles lay eggs," our local volunteer Ricardo pointed out to us as we stood on the wide sandy beach northeast of Luquillo, Puerto Rico.  This is the Northeastern Ecological Corridor, eight miles of beach and over 2,000 acres of forest, critical to the survival of leatherback and hawksbill turtles.

Leatherback turtles are an ancient species that have been in our oceans for over 50 million years.  Adults can be eight feet long and weigh 2,000 pounds. They are deep sea divers and have a flexible "leather" shell that withstands the crushing pressure of water thousands of feet underwater as they pursue jellyfish and other deep sea delicacies. Annually, female leatherbacks labor onto Puerto Rico's beaches to lay up to one hundred eggs some three feet under the sand. Sixty to seventy days later, baby leatherbacks emerge from the sand at night and make their way down the beach into the ocean.

Unfortunately, over the last 30 years, leatherback populations worldwide have declined from an estimated 115,000 nesting females in 1980, to 35,000 today. In addition to the loss of beach habitat, ingestion of floating plastic bags, which look like jellyfish, is a likely factor in this decline. Light pollution from homes and resorts by nesting beaches can disorient turtles that rely on stars for navigation.

My family was extremely lucky to actually see a leatherback turtle hatch. We were on an evening walk on the beach and noticed in the distance two baby turtles making their way towards the sea!  We ran over to a nest where eventually fourteen emerged. The joy of seeing this gave my wife and I one of the greatest highlights of the trip, watching our daughter and son hugging each other, overwhelmed with the happiness and wonder of seeing such an ancient and hopeful sight.

A stunning beach with turquoise waters, wide sandy beach and breathtaking vistas, the Northeastern Ecological Corridor Reserve attracts not only turtles, but also investors with dreams of exclusive resorts. This area has for years been under threat of development due to its raw beauty. Fortunately a coalition of turtle advocates, community leaders, and biologists came together to form a grassroots coalition to protect the Ecological Corridor. Sierra Club volunteers, such as Cristobal, Alberto and Ricardo lead outings to educate and build community support for protecting this area in its natural state.

The dedication and hard work of local Puerto Rican community leaders and Sierra Club staff and volunteers paid off and last year the Corridor became a nature preserve. Yet much remains to be done.  The 2,000 acres of the Corridor is a patchwork of public and private lands. The government has eight years to put together land deals and management plans to realize the intent of a protected nature preserve, or it could revert back to unprotected status. The Sierra Club is committed to continuing to build community support and government commitment to create a nature preserve that balances public access with turtle conservation and economic growth for surrounding communities.

Seeing those baby leatherbacks struggle down the beach instilled in me an enormous sense of responsibility and hope -- responsibility to continue the 50 million year legacy of survival for leatherbacks, and hope from the deep commitment of many Puerto Ricans to protecting their natural heritage.

-- Dan Chu, Our Wild America director. Photo by Dan Chu of the turtles he and his family saw hatching.