Idaho's Boulder-White Cloud Mountains form one of the largest unprotected National Forest roadless areas in the lower forty-eight states.  A land of superlatives, they contain some of the state's highest peaks, beautiful mountain lakes, and abundant wildlife.  Adjacent Bureau of Land Management lands to the east are a drier, more austere country whose mountains, such as Jerry Peak, contain sagebrush habitat which offers wintering areas for big horn sheep and other animals.  All told, this rich region provides habitat for the Canada lynx, wolverines, bighorn sheep, elk, bear, mountain lion, and wolves.   Its mountain goat herd is one of the most southerly naturally occurring herds in the nation and has historical significance as the livelihood of the Sheepeater Indians, who were driven from the area in the 19th century.  Salmon, which travel the farthest inland and to the greatest elevation of any Pacific salmon run, use the Boulder-White Clouds to spawn.  Such diversity of wildlife and habitat is a rare and precious resource in America today. 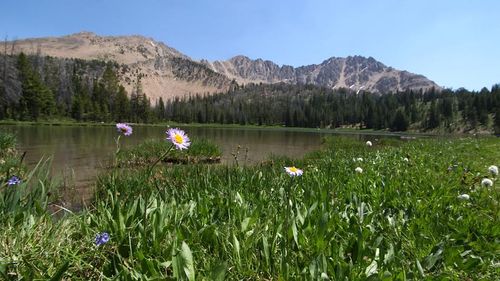 Idahoans  have sought Wilderness protection for the Boulder-White Clouds for over thirty years,yet the area remains unprotected.

Today we have a chance to protect the Boulder-White Clouds as a presidentially proclaimed national monument.  Monument designation would allow the entire region, including almost all of the East Fork Salmon River drainage to be managed under one comprehensive plan, instead of being governed by multiple Forest Service and Bureau of Land Management plans.  A monument could attract greater resources enabling managers to restore and protect habitat in a comprehensive way, manage recreation better, provide historical and scientific interpretation, and protect the area's wilderness values. It would also withdraw the area from future mineral leasing.  County governments in the closest communities of any size, Ketchum and Hailey, support a monument designation, as does public sentiment in Boise, Idaho's largest city.

Just three days ago Sierra Club Executive Director Michael Brune visited the Boulder-White Clouds with his family. There, we showed him our Idahoan hospitality and got to give him a tour of this area that so badly needs protection. The gorgeous and stunning scenery cannot fail to make an impression on anyone who sees it. Hopefully, the next time he visits the area it will be one of our country’s newest national monuments.