Federal agencies fail grizzlies once again in the Upper Green 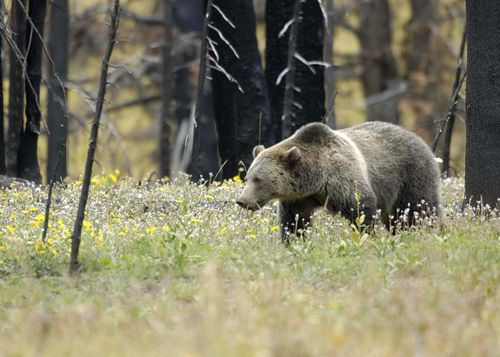 Because Yellowstone grizzlies are protected under the Endangered Species Act (ESA), any federal action that could jeopardize the continued existence of the species and/or its habitat must be evaluated. If it is determined that the action (in this case, livestock grazing), will not jeopardize the species but could result in ‘take’ of the species, the take must be quantified and an exemption from the Act is granted.

The U.S. Fish and Wildlife Service has repeatedly raised the number of bears that can be killed in the Upper Green while failing yet again to require measures to reduce conflicts. The title itself of the just-released decision tells the story: “Biological Opinion for the 2014 Supplement to the 2013 Supplement and 2010 Amendment to the 1999 Biological Assessment for Livestock Grazing on the Northern Portions of the Pinedale Ranger District.” In 2011, the incidental take limit of six bears was exceeded the following year, even though the term of the take statement was 10 years, through 2020. In 2013, a new take statement upped the take to 11 bears, which was supposed to be through 2017, but by earlier this month, six grizzlies had already been killed. And now in 2014, the agency has allowed another 11 bears to be killed in the next three years. According to the agencies, the Yellowstone grizzly population is ‘recovered,’ (though it remains on the Endangered Species List), and the Upper Green grizzlies are viewed as ‘extra’ bears.

Sierra Club and several other non-governmental organizations are pushing the agencies for more requirements to actually reduce conflicts, instead of ignoring the problem and simply raising the take. The Forest Service, as the agency that grants grazing permits on the lands the agency manages, has the authority to require livestock producers to do more to reduce conflicts. So does the U.S. Fish and Wildlife Service, which has the ultimate authority over species protected under the ESA.  The only meaningful measure in recent years that has been required, night penning of sheep, has been effective in reducing conflicts when done correctly. Now, however nearly all the conflicts are with cattle, and nothing further is being required, or even attempted, by either agency to resolve conflicts between grizzlies and cattle.

Though every situation and landscape is unique, conflict reduction measures have been proven to work elsewhere. Altering grazing patterns, having more riders with livestock, use of guard dogs and other methods have been effective. Federal agencies and the producers who graze their cattle on public lands in the Upper Green should be actively working to find solutions instead of ignoring the problem and killing more bears, particularly a threatened species trying to survive on public lands. The Upper Green has more conflicts than anywhere else in Greater Yellowstone. This is where solutions are needed most. But unfortunately for grizzly bears, federal agencies have once again bowed to political pressure and increased the number of grizzly bears that can be killed in the Upper Green while avoiding the hard work of finding real and lasting solutions.

The U.S. Fish and Wildlife Service has repeatedly increased livestock-related incidental take of grizzly bears in the Upper Green: