Often we think of illegal logging as a threat to ecosystems and wildlife. However, this week provided a tragic reminder that illegal logging harms not only harms plants and animals, it also threatens people and communities around the globe. In a remote region near Peru’s border with Brazil, a prominent activist, Edwin Chota, was shot and killed, along with three community leaders. Suspected in the killings were illegal loggers, who have long tried to extract tropical hardwoods in nearby forests. 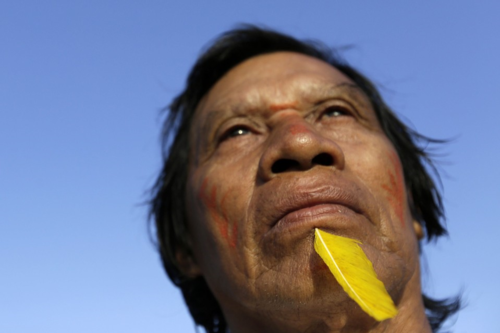 A Ka’apor Indian watches a group depart on a jungle expedition. Lunae Parracho/Reuters

Unfortunately, these slayings are not an isolated occurrence. According to a recent report by Global Witness, more than 900 people were killed from 2002 to 2013 while trying to protect the environment and land rights. While this violence has spread around the globe, Latin America has been particularly impacted, with Brazil accounting for nearly 450 of these cases.

As illegal loggers venture deeper into the forest to extract valuable hardwoods, tensions often arise with local communities. In Brazil, the Ka’apor tribe has lost roughly one third of their land since the 1980s to deforestation and cattle grazing, driven by illegal logging. Tired of encroachment by loggers and a lack of enforcement action by Brazilian authorities, the Ka’apor are taking matters into their own hands. In recent months, the tribe has begun capturing illegal loggers, taking their clothes, and forcing them to leave the area. At the same time, warriors use confiscated tools to destroy already-cut timber and logging equipment.

Though this violence occurs in countries that produce timber, such as Brazil and Peru, consumers in the United States and other timber-consuming nations share some responsibility. According to a report on illegal logging in Peru by the Environmental Investigation Agency, wood from one Peruvian mahogany tree and one cedar tree can fetch $11,000 and $9,000 on the U.S. market, respectively.

The Sierra Club expresses our deep condolences and our full support to all who have experienced or who have been touched by violence and intimidation for standing up and fighting against illegal logging. We are doing our best to contribute to the work of those fighting illegal logging by working to stop demand for illegally harvested wood in consumer countries like the United States. At stake are not only endangered plants and animals, but people’s lives.

Posted at 08:09 AM in illegal logging | Permalink